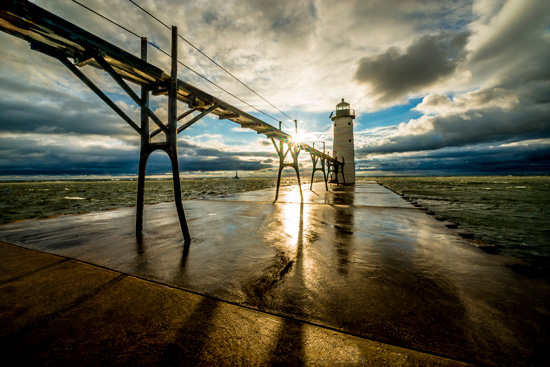 One of the most symbolic icons of the Victorian Port City is the North Pierhead Lighthouse, located between the 1st Street and 5th Avenue beaches. 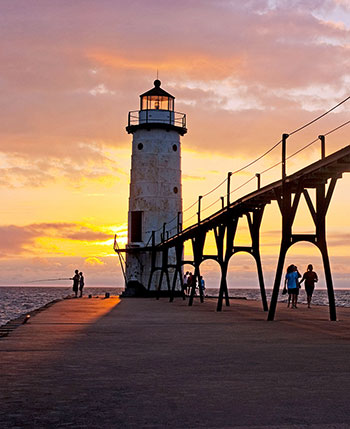 Photo by ToddAndBradReed.com
Standing watch over Lake Michigan waters, the North Pierhead Lighthouse welcomes boaters into its harbor, and is a reminder of Manistee's great maritime history.

First built in 1869, it burned in the Great Fire and a new one was constructed in 1872. The North Pierhead Lighthouse is built from cast iron and stands 39 feet tall.

Many changes have taken place over the years--including a wooden catwalk that was eventually replaced by an iron one around 1900. Many Michigan lighthouses demolished their catwalks when the lights became electrified, so Manistee's catwalk is a rare sight. In the late 1920s, after extensive pier renovations, the old fog signal building was replaced by the present structure.

From Highway 31 in Manistee, take Memorial Drive, the first street north of the Manistee River, west towards Lake Michigan. Memorial Drive will become 5th Avenue. Take 5th Avenue to John Red Szymarek Park at the corner of 5th and Monroe. Turn right and follow Monroe to a traffic circle whose center piece is a lighthouse. Go 3/4 of the way around the circle and turn right on Lakeshore Drive. You can either park in the 5th Avenue beach parking lot or continue on a bit and possibly park near the Coast Guard Station, from there you can walk the breakwater to reach the Manistee Lighthouse.

Grand Traverse Light Station -- Located on the tip of the Leelanau Peninsula in Northern Michigan, The Grand Traverse Light was established in 1852.
Point Betsie Light Station -- Nestled in a dune just south of Sleeping Bear Dunes National Lakeshore, the tower stands 39 feet tall, but with the height of the dune it towers 52 feet above Lake Michigan.

Manitowoc North Breakwater - Walk out to the end of the pier to this Manitowoc lighthouse, and wave to the carferry S.S. Badger as the ship passes by.
Algoma North Pierhead - This lighthouse can be seen all along the Crescent Beach Boardwalk and is accessible via the pier if you want to venture closer.
Kewaunee Pierhead Lighthouse - Located in Kewaunee, Wisconsin...halfway between Sturgeon Bay and Manitowoc along Lake Michigan.